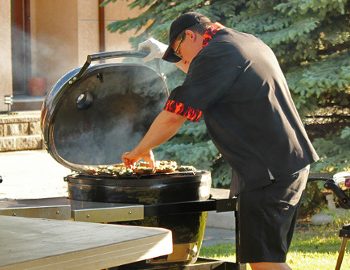 The official start of spring is right around the corner which means barbeque season is once again upon us! If you’re feeling a bit rusty when it comes to hosting a BBQ after so many months indoors, fear not – BBQ Brian is here to help!Using his three flawless BBQ tips and our classic tomato and vinegar-based BBQ sauce, Rock’n Red, your first BBQ of the season will be the talk of the neighbourhood!

Step 1: Invite Your Friends And Family

It’s not a spring BBQ if you don’t have great company to enjoy it with! Make sure your friends and family will be able to attend. Plus your BBQ skills deserve an audience.

Step 2: Plan The Food For Your Spring Barbeque

Start off simple and delicious, it means less work for you but your guests will still be impressed and wanting seconds. BBQ Brian suggests grilling chicken wings with our Rock’n Red BBQ Sauce. This tomato and vinegar-based BBQ sauce has a classic BBQ taste and the mild flavour has hints of smoke and pepper. It’s sure to be a hit with all of your guests!

Now that the meat is figured out, it’s time to think about the sides. You’ll need to pair the chicken with an assortment of spring veggies. BBQ Brian loves asparagus, mushrooms, red peppers, and zucchini. Slice ‘em up, drizzle with olive oil, sprinkle with salt and pepper (or better yet, our House Rub), and toss them into a grill pan over medium heat. Cook ‘em until they’re tender and have some nice colour. Delicious!

Every great BBQ needs a great playlist. Background music helps set the mood of your BBQ and abolishes any awkward silence when there are lulls in the conversation.

It only seemed natural to pair our Rock’n Red BBQ sauce with the Red Hot Chili Peppers. Their smooth sound, like our vinegar based sauce, is mild with hints of smoke and jolts of peppery flavour. BBQ Brian kept this criterion in mind as he chose an eclectic mix of songs to fill out the rest of the playlist.

And now you’re ready to have the best spring BBQ ever. Enjoy!

Canadian Company Awarded For One of World’s Best BBQ Sauces