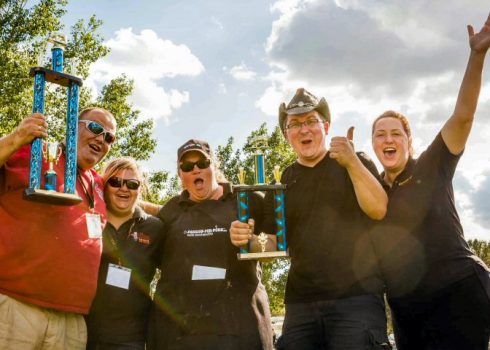 While many people are cleaning up their yards and getting prepared for the pending fall and winter season, there are some that are gearing up. BBQ Brian and the cook team at House of Q are just the opposite, that is, they are gearing up preparing for some of the most competitive and rewarding BBQ competitions anywhere.  In the world of competitive BBQ, the change in weather never seems to an impact on cooking.

In late October, the fourth weekend in fact, teams from all over the world gather in

Lynchburg, Tennessee for the Jack Daniels World Invitational BBQ Championships. The teams are invited to attend and are celebrated with dinners, gift bags and even a
parade through the picturesque town.  There will be three Canadian teams that are regularly on the BBQ trail including Rob Reinhardt from Prairie Smoke and Spice (Regina, Saskatchewan) and Danielle Bennett better known as Diva Q BBQ (now based in Lakeland, Florida) and of course BBQ Brian of House of Q.

Danielle, Rob and BBQ Brian have met twice this year at Canadian competitions in Regina and in Edmonton and represent BBQ all across Canada.  Diva Q is the host and creator of the popular BBQ show called BBQ Crawl where BBQ Brian was in the episode filmed at the World Food Championships in Las Vegas in November 2014.

Following the Jack, BBQ Brian and the team will convene in Kissimmee, Florida for the new location of the World Food Championships.

This event has both grown in size with over 400 different chefs competing for $350,000 of cash and prizes but also to a bigger location just outside of Orlando.

BBQ Brian won first place ribs at the championship in 2014 and will garner to increase the 7th place overall finish for top prize. This will be the first time for Reinhardt to attend the event while Diva Q is a final table judge thus both eating and providing her professional input on who walks off stage with $100,000.