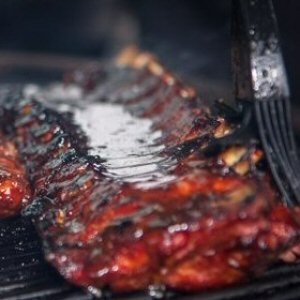 Whether it’s back ribs, side ribs or spare ribs…  the technique on How to BBQ the World’s Best Ribs remains the same.  Even for beef ribs which are completely awesome!  Either way, choose a rack of ribs you like, follow the three steps below and make something fantastic for your guests with some tremendous flavour!

Ribs are great to cook on the grill. However to get tender ribs, there are a few steps to cooking them WITHOUT BOILING the ribs.

Start by removing the membrane on the back of the ribs. Lift an edge of the tough film and then use a paper towel to help you grab the membrane. If you have a good grip of it, you can pull the whole thing off in one pull.  Smear Slow Smoke Gold mustard sauce all over the ribs and then coat both the back and the front generously with House Rub. Let the ribs sit at room temperature for 5 to 10 minutes so the rub can start to draw moisture from the meat and stick to the ribs. If you move the ribs too soon, all of the rub will fall off.

Prepare your grill for indirect cooking, medium heat. Place the ribs on the OFF or cool side and add smoke chips such as apple, cherry or hickory to the HOT side inside a foil packet or inside a store bought smoke box. Close the lid and smoke the ribs for about 90 minutes to 2 hours for the first step. This step will give the meat a lot of flavour and set the rub on the meat.  They should look “crusty”, not soft and mushy.

Prepare a sheet of foil with some maple syrup drizzled on it – the same width as the rack of ribs. Curl up the corners of the foil and add a bit of apple juice being careful it doesn’t run out of the foil. Take a rack of ribs from the grill and place meat-side down on the maple syrup. Loosely wrap the foil and return to the grill again, on the indirect side for another 45 minutes to one hour. This step will make the meat soft and tender.

Open the foil pouches and being very careful of the steam and hot liquids inside, remove the ribs and place back on the indirect side of the grill. Brush with Apple Butter BBQ Sauce and close the lid. This step allows the sauce to set on the ribs and to tighten up some of the meat fibres so the racks don’t fall apart. This glazing step should only take 15 to 40 minutes.

Remove the racks from the grill and let rest for 5 to 10 minutes. Cut between the bones for each portion and serve.