Our Story – Everyone has a Tale to Tell… Here’s Ours.

Scroll through the timeline or the story of House of Q.  It all stated back in 2005 and events are listed as they happened over the years.  We left out a few of the stories because we thought this is just a timeline, not a biography!

House of Q Goes to the First Competition 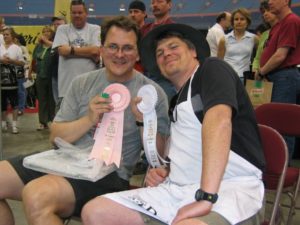 BBQ Brian Misko and Glenn Erho decide to start competition BBQ and enter the BC Festival of Chili and BBQ.  Both had day jobs and the weekend “hobby” fired their new-found passion.  The team was awarded for 6th place ribs and 3rd place chicken.
2006
April 15 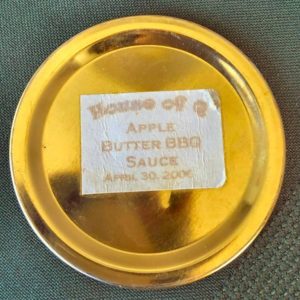 It really was a bag of apples peeled, cored and cut up in Mom’s “borrowed” stock pot.  Then molasses, sugar, spices and even some rum in the beginning…  and that was the original Apple Butter BBQ Sauce.  BBQ Brian made a “big” batch in the pot and put it into..Read More
September 1 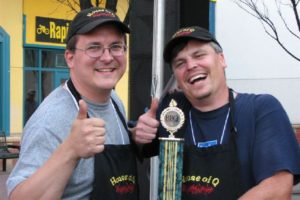 The efforts to get to as many competition BBQ events as we could took House of Q to three events in 2006: the BC Festival of Chili and BBQ (Vancouver), the Canadian National BBQ Festival (Whistler) and BBQ on the Bow (Calgary).  House of Q was awarded Reserve Grand Champion..Read More
2007
February 1

With the launch of the Apple Butter BBQ Sauce, the company was officially incorporated as a company and started February, 2007.  The name is House of Q Foods Ltd.
May 1 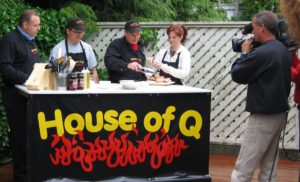 In the spring of 2007, BBQ Brian and Glenn started filming (yes, they filmed then!) BBQ Tips for Global TV BC with Lynn Collier and Steve Darling.  The team filmed and broadcast 8 TV segments.
September 9

Not 1 but 2 Grand Championships!

With a tie for total points, House of Q was awarded their first-ever Grand Championship in Trail, BC in May of 2007.  The team was awarded Grand Champion later in September 2007 at the BBQ on the Bypass in Langley, BC.

Keep going…  click onto another “chapter” of the story by seeing the next page.