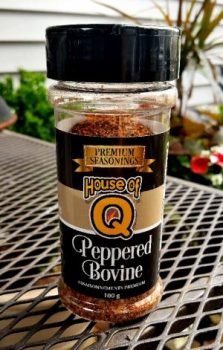 House of Q has been accumulating competition BBQ awards across North America for both their cooking and for their BBQ sauce and spice products. The ability of BBQ Brian Misko, head Pitmaster and owner, to interpret judged competitive entries and create commercial products has allowed the company to gain a growing customer base.

Adding to their line of products is the new Premium Seasonings line of grilling spices.  The seasonings will focus on the highest quality ingredients and allow grilling and BBQ fans to achieve better flavour from their food.

Often the combination of increased consumer sensitivity to price and retailers interest to maintain margins, the quality of ingredients can be diminished.  Over the past two to three years, as an example, black pepper has doubled in price on the world market as a raw ingredient.  Manufacturers can compensate by reformulating their products to have less of a expensive ingredient and add a similar and less expensive ingredient to help with the flavour. This as BBQ Brian says, “means consumers are getting not what they think they are for spices and an honest flavour”.

The Premium Seasoning line from House of Q will focus on pure, high quality ingredients and this is reflected in the first item called Peppered Bovine.  This is a mixture of pure sea salt, black pepper, dehydrated and granulated red pepper and cayenne.  The seasoning is fragrant, peppery and allows grillers to highlight the natural flavour of beef, chicken, vegetables or where ever the seasoning is sprinkled.

“… it’s a simple steak seasoning and it’s what the market needs! Most steak seasonings are way over the top. On first try it worked very well with the steak but it will be VERY versatile as an all around seasoning.  I used it on grilled broccoli and asparagus that I served with the steak.”

He followed up with another message a few days later:

“So tonight I used Peppered Bovine on chicken. Used it as a base and added smoked paprika, oregano and chili flakes for a “blackening rub”. Just wanted to let you know it’s an awesome all around seasoning. Well done!”

The Premium Seasoning line will be available through House of Q retailers and online at their store.

Over time BBQ Brian says “we will add more items to this part of our product offering with more seasonings and different flavours hopefully allowing grillers and BBQ fans to be able to create some really cool flavours.”