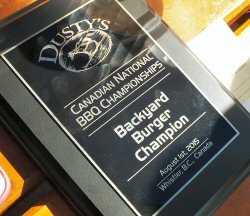 For fifteen consecutive years, Dusty’s Bar and BBQ in Whistler, BC has been the host for the Canadian National BBQ Championships. The contest gathers competition BBQ teams from around the Pacific Northwest as well as backyard cooks.

One of the intensely competitive categories is the Backyard Burger Championships in which House of Q was awarded first place burger on Saturday, August 1, 2015.

The contest had dozens

of entries that included three teams that competed in the 2014 World Food Championships in Las Vegas, Nevada. One contestant was recently crowned the burger champion at the Canadian Food Championships in Edmonton.  Needless to say, the entries were tasty and the judges had a challenge to choose the best burger.

BBQ Brian crafted the burger with his teammate, who is also his wife, Corinne Misko.  The burger was rather simple in nature and is based on a recipe from his Grilling With House of Q cookbook.

The base recipe is from his Cranked Up Meatloaf and formed into a burger patty…  topped with lettuce, tomato, guacamole and of course cheese.

The burger will be featured on Dusty’s menu during the 2015-2016 winter ski season.  Dusty’s staff share that people from all around the world come into the bar for a meal and beverage while enjoying the world class skiing.

BBQ Brian says he is rewarded to know that many people will taste his creation and hopefully take on the task to create it at home by cooking the recipe in the cookbook.

For more information contact House of Q at [email protected]

Let’s get ready to Rrrrrrrrrib-fest!

US Trademarks Awarded for House of Q