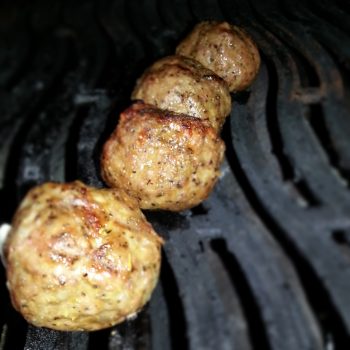 This is the third of three recipes that I wanted to share to those that might be having a New Years Party. The first was an awesome appetizer of Grilled Oysters a la House of Q.  That was followed by a childhood memory of perogies however my version of Grill-planked Perogy Potatoes.

For this recipe, I wanted to continue with the simple serve foods, just like you may have a t a New Years Eve cocktail party, and make a variation of my Andouille Sausage meatballs, with a twist!

One of the most favorite food places to go in North America is Louisiana or Cajun country.  While there on a trip I learnt of Andouille sausage and once home found a recipe to make my own. At first I made traditional sausage with it and then a year or two ago into meatballs. Why not? I love these little two-bite nuggets of meaty goodness.

The variation I wanted to share incorporated a different sauce and a different stuffing inside the meatball.  You see, the base of this recipe is one of the recipes posted on the “Recipe” page however it is not in my cookbook Grilling with House of Q.

The measurements for this recipe are rather heavy for seasoning thus I encourage you to try it with half of the spices first then change as you see fit.  For some, this might have too much garlic while others might find it has too much pepper but overall it should be a strongly seasoned meat.

Mix the seasonings well in the ground pork.  Place the mixed pork in the refrigerator for an hour or two so the seasoning absorb into the meat.  Remove from the fridge and form into equal sized portions for meatballs (about 1 1/2 ounces each).  Press the meat into your hand forming a small “pattie”.  Place a cube of cheese in the center and squeeze up all of the meat around the cheese making sure it is all sealed up.  A little water on your hands may help to finish the “coating” on the outside of the meatball.

To make the sauce, add the three ingredients into a sauce pan, bring to a boil and simmer for 15 to 20 minutes. Lower heat and hold for the cooked meatballs.

Sear the meatballs on a medium-high heat grill (approximately 350 F) until the internal temperature reads 160 F.  Remove from the grill and place in the sauce. Continue to hold at a low temperature until you serve your guests. Be careful not to heat them too much…. the cheese can start to run out of the meatballs.

Do enjoy you New Years party and a few of BBQ Brian’s favorite dishes. Thank you for your support, interest in House of Q and cooking! Happy New Year!

The World’s Best BBQ Ribs are from Canada?!

And the Best BBQ Burger in Canada Goes to…