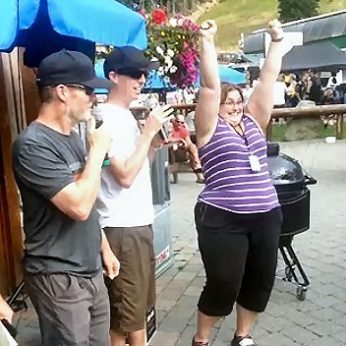 For any competitor, especially where the competition involves food and cooking, it is the ultimate treat to have your recipe on a restaurant menu.

The event is hosted by Dusty’s Bar & BBQ in Creekside and draws BBQ teams from all over the Pacific Northwest.

House of Q has attended the event every year for the past nine years and this past summer was finally awarded the best burger amongst 35 entries.  Head Pitmaster and seasoned competitor BBQ Brian Misko says his sister “has a knack for burgers since she won third place two years back at her first ever competition but this entry simply nailed it.”

The burger is now a featured item on Dusty’s menu through the 2013/2014 ski season.  The burger features a tasty seasoned beef patty which is wrapped in bacon before being topped with House of Q signature Apple Butter BBQ Sauce sauteed onions and smoked cheddar cheese.

“We hope that people who go to the restaurant can catch some of what we do in competition since it really it some of the best food you can ever eat”, says BBQ Brian.