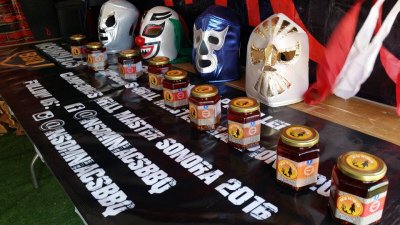 The story is unique.  It is easy to argue that BBQ, especially competition BBQ, is really ‘American’ centric and many well beyond the borders of USA have the same cravings.  BBQ Brian and the gang at House of Q have been for 12 plus years mastering the highly competitive sport and at the same time, doing their best to share the skill with whomever they warrant an audience.

In November of 2015 while traveling home from Florida, Brian, Corinne and Greg Ewart stopped for a detour and went to Hermosillo, Mexico to teach a few very enthusiastic cooks the details of competition BBQ.  The group never attended a BBQ competition nor had even exposure to what it was all about.

This is about the point in the story where it starts to get interesting…  you see, within months after the class the group crafted their competition team and called themselves the ‘Insomniacs‘.  The Society Mexico de Parrilleros (“the Mexican Grilling Association”) is the sanctioning body that holds events in Mexico and it all starts with regional qualifiers followed by a national competition.  The Insomniacs, at their first ever event, won their regional qualifier and then at their second ever contest, won the national title!  This is amazing!

Along the way as the team prepared for both contests, BBQ Brian acted as a coach, a sounding board and even a “remote teammate”.  This eventually lead to BBQ Brian joining the team IN Mexico in March of 2017 for a competition in Hermosillo as an Insomniac.  This was an amazing experience and an event that was quite different than the 120 or so competitions BBQ Brian had ever attended in Canada and the USA.  The point though is the Canadian, BBQ Brian, was both learning from the Insomniacs about competitive grilling in Mexico and at the same time offering expertise to his teammates about ‘American’ competition BBQ.

So, the Mexican national title wasn’t the final goal for the Insomniacs…  there was tremendous inspiration to cook at Memphis in May and to compete head-to-head with the BBQ teams seen on TV, heard of, heard about, bought their spices or sauces and well, be amongst the who’s who of American BBQ.

This came true in May of 2017 as the team planned to attend the notable and honorable event in Memphis.  BBQ Brian took the team lead as he joined the team in Memphis to cook in the pork shoulder category.  This was both an amazing and exhausting time for all…  between assembling by borrowing, renting and even shipping the entire kitchen to planning for the completely different type of contest that none of us had ever experienced.

The team was a group comprised of 9 guys – 8 from Mexico plus BBQ Brian from Canada.  Most of the guys from Mexico spoke little to no English and well Brian spoke barely enough Spanish to order a taco at a restaurant.  But that didn’t stop the group.

There were around 210 teams competing at Memphis in May with 55 in the pork shoulder category.  The blind tray of cooked meat went off to the judges like many of the competitions BBQ Brian had attended.  However, three judges then proceeded one at a time to come to the Insomniacs tent and be presented (sold?) on the Insomniacs pork shoulder. The team cleaned up the tent, decorated with Mexican flags, hung banners from sponsors like the state of Sonora and decorated the smoker to hold the pork shoulder.

The judges loved us! Two of the judges gave the team perfect scores while the third deducted us for texture (oh well).  That was easy to digest and remind ourselves that we were doing just fine.  The Insomniacs finished with a 31st place amongst the 55 teams.

Thank you to the Insomniacs for an amazing opportunity to share the spirit of BBQ both in Mexico, in the USA and truth be told even back at home for BBQ Brian IN Canada.  This is likely the true spirit of what BBQ is all about…  bringing cultures and people together. So, if you are reading this, go invite someone over for a BBQ.  You never know what will happen!