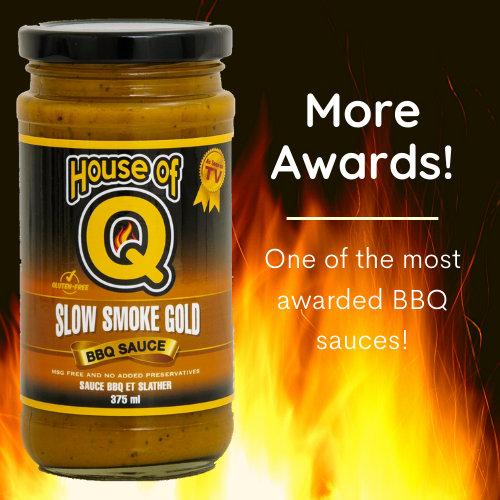 Even during the challenging 2020 pandemic year, House of Q based in Vernon, BC, Canada continues to be awarded for their BBQ sauces.

At the American Royal World Series of Barbecue in Kansas City, MO Slow Smoke Gold BBQ Sauce was awarded 8th place in the mustard category. This contest is one of the largest and most competitive events in the world of competition BBQ. Slow Smoke Gold has won three awards at this event with two, yes twice, second place awards in 2012 and 2013.

Slow Smoke Gold BBQ Sauce represents BBQ Brian Misko’s, owner and head Pitmaster at House of Q, interpretation of a Carolina-style mustard sauce. It is strong with vinegar and mustard with notes of tomato and pepper. BBQ Brian crafted the sauce in 2005-2006 to be the first layer of flavor for pork butts (pulled pork) and pork ribs for his competition BBQ team. The sauce was one of the ingredients used to win his first place ribs at the World Food Championships in Ls Vegas, NV in 2014.

Fans declare in reviews at All Things Barbecue in Wichita, KS website as: “Great flavor. Love it”, “I love this BBQ sauce. Has a good flavor for BBQ ribs. Must have!” and “this is the sauce to have on hand”.

House of Q is a Canadian based BBQ sauce company started in 2007. There are 350+ retailers in Canada for their full line of sauces and spices. All Things Barbecue is their main retailer and distributor in USA with shipments to over 16 countries.

To find a store in Canada or to order online, visit houseofq.com

And the Best BBQ Burger in Canada Goes to…